Beyond the Racing at NAPA Super DIRT Week 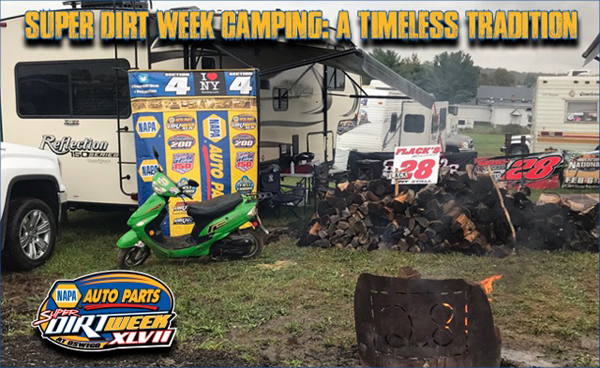 Racing’s Biggest Party is packed with entertainment, friends and family, and memories, old and new. Tomorow night DJ Rick Uhl will kick up the party a notch after the Gander Outdoors Friday Night Lights with music on the stage behind turn three. And this year that same stage will play host to several Dirt Track Digest LIVE shows, Friday at 5:45 p.m, Saturday and Sunday at 9 a.m., and Sunday after the Billy Whittaker Cars 200.

Meanwhile, race fans of all ages are making their own off-track entertainment on the rollicking campgrounds. As the weekend nears, over 450 campers and RVs have already invaded the grounds despite the pesky rains. Local hotels have filled, but as many campers will say, the true Super DIRT Week experience means crashing at the campgrounds. Spots were sold out all the way back in mid-August, making it the third straight year of camping sellouts in Oswego

NAPA Super DIRT Week Sportsman Modified competitor and weekly racer at Airborne Park Speedway, Nick Heywood camps out each week at his home track in Plattsburgh, NY, and he and his crew love the festivities at Oswego. Cooking out, playing cornhole with his friends and family, and of course having a few cold ones after each night keeps Heywood coming back.

“We like to walk around and check out the other campsites and meet all new people,” Heywood said. “It’s a good time.”

Fellow Green Lot camper Nate Vanslyke, a Gloversville, NY native, has enjoyed Big-Block Modified racing action at the local Fonda Speedway for years, and said his experiences at NAPA Super DIRT Week have always brought about a sense of togetherness.

“We all pitch in and help out, coming up here to DIRT Week each year,” Vanslyke said. “It’s always like a community effort.”

Vanslyke has been camping out at the racetrack since he was seven and enjoys coming back year after year, meeting new people and soaking in the atmosphere.

“We go to the races and make new friends every time we go,” Vanslyke said. “We have a blast with it.”

Vanslyke met now-good friend and Race Pro Weekly contributor Ray Rodgers at Fonda Speedway in his years of camping out. Rodgers has been camping at NAPA Super DIRT Week since back into the New York State Fair days, and he enjoys the unique site setup at the Steel Palace.

“The camping experience here is different because it’s not like Syracuse, where everything is all combined in one general area,” Rodgers said. “We’re all spread out here. There’s a lot to see, a lot to do. It’s really a great experience to come here and be a part of the whole event.”

There are some RVs set up around each campground, but like most fans in the area, Rodgers and Vanslyke have a more traditional setup with a trailer-style camper backing up a big tent, fire-pit and chairs. And that’s their preferred way to stay in Oswego.

“It’s part of the adventure,” Rodgers said. “Coming here is an adventure in itself. For me, putting a tent out makes it more of an adventure. Everybody’s got their cozy campers, but for me, I prefer to just rough it a bit more and really have an experience.”

Bridgeport Speedway regular Ryan Watt and his family are also camping on the Speedway grounds, in the Black Lot. The Black Lot has electric, water and sewage hookups available for all units — something Ralph Watt, Ryan’s father, values a lot in his camping experience.

Ralph has been racing and camping and Super DIRT Week for over 40 years. He loved watching races on the Syracuse Mile, but here for the first time with his son, he gets a deeper sense of familiarity at Oswego.

“I like it here because this track reminds me of my Saturday night track,” Ralph said. “A 5/8-mile, that’s what we run on. I think the racing’s better here.”

Sure, it rained a bit, the action on the track has been delayed, and there has been a bit of a chill in the air, but it just wouldn’t be Super DIRT Week without hundreds of race fans making their contribution to the beautiful New York tradition.

Tickets are still available for tomorrow’s NAPA Super DIRT Week experience. Cars hit the track early at 10 a.m., with racing all day and all night as the Gander Outdoors Friday Night Lights action begins at 6:55 p.m.