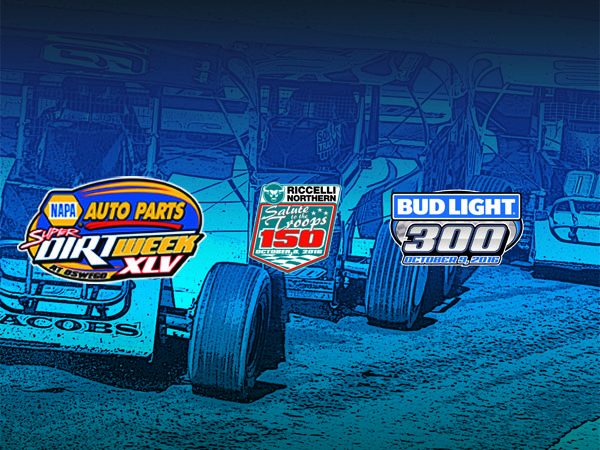 CONCORD, N.C. — Sept. 13, 2016 — DIRTcar Racing is pleased to announce partnerships with Bud Light and Riccelli-Northern for the naming rights of the two most storied events on the 45th Annual NAPA Auto Parts Super DIRT Week schedule, now the Bud Light 300 and the Riccelli-Northern Salute the Troops 150.

“Bud Light is pleased to partner with DIRTcar Racing as the headline sponsor for one of the biggest races in New York State,” said Dan Dorsey, Jr., owner of Eagle Beverage, Oswego, NY. “Super DIRT week is so rich in history, and we’re glad to be a part of the event as it starts its next chapter with the new racing venue.”

The Bud Light 300 will headline the week of on-track activities at the famed Oswego Speedway.

“Everyone at DIRTcar Racing is very excited to have Bud Light and Riccelli-Northern join an already great list of partners for NAPA Auto Parts Super DIRT Week. Adding these brands truly shows that this is a world-class event. NAPA Super DIRT Week is bound to go down as one of the most exciting weeks in racing to date,” said Chief Executive Officer of DIRTcar Racing Brian Carter.

NAPA Super DIRT Week has a new home at the historic Oswego Speedway this year. The “Steel Palace” is a 0.625-mile asphalt-oval that will be transformed by nearly 600 truckloads of clay. The week will kick-off with early-parking for campers starting on Sunday, October 2. One of the many new additions to the schedule this year is the Early Bird tech inspection for all classes and competitors starting on Monday, October 3.

The format and schedule for NAPA Super DIRT Week at Oswego Speedway will remain the same as previous years with on-track action every day from October 5 through 9 at Oswego Speedway – including the return of Friday Night Lights. Friday evening’s program will feature DIRTcar 358 Modified, DIRTcar Sportsman Modified, and Super DIRTcar Series Big-Block Modified Qualifying Races.

Saturday will feature a full morning of practice for the various divisions. The day-action at the Oswego Speedway will be sealed with the DIRTcar 358 Modified Riccelli-Northern Salute the Troops 150, scheduled to roll-off the grid at 2:00pm EST. The nightcap will follow as the World of Outlaws Craftsman Sprint Car Series invades Fulton Speedway. Also up for grabs at Fulton Speedway is the 41st spot in Saturday night’s Big Block Modified feature with the “Win and You’re In” race.

The Bud Light 300-lap main event is scheduled to go green at 2:00pm on Sunday at Oswego Speedway, with the infield hot pit gates opening at 8:30am and the grandstands opening at 10:00am.

Close to 300 competitors will be vying for the winner’s share of the Bud Light 300 – $50,000 dollars. Stewart Friesen has taken the checkers the last two years, including The Finale at the Fairgrounds in 2015. A total payout of more than $350,000 in both cash and prizes will be awarded over the course of the week.