Max McLaughlin’s win at Land of Legends Raceway in June did more than give him his first points-paying Super DIRTcar Series win.

With Land of Legends having similar characteristics to the dirt covered Oswego Speedway, he found a set up he’ll be confident in come October for the 50th Running of NAPA Auto Parts Super DIRT Week and built momentum for an overall championship run.

“I think we’ll have a good package for that style track (at Oswego Speedway),” McLaughlin said. “It’s kind of a [Land of Legends Raceway] style place that doesn’t really get as slick as like Orange County (Fair Speedway), but when it slicks off completely and gets black it gets a little more grip. That seems to be our strong point as of now. We’ll just jot that down. Even if we get off this set up a little bit. Probably go back to that for Dirt Week and try to prepare good pit stops. Two-hundred laps, just have to be patient and make sure we’re there at the end.”

The Mooresville, NC driver rejoined Heinke-Baldwin Racing at the beginning of 2022 and found quick success, winning in their fourth race back together during DIRTcar Nationals in February. And while the victory was his third Super DIRTcar Series win, it was also his third straight non-points paying win.

He ended that streak with his Land of Legends victory, giving he and the team a boost of confidence after a rough start to the championship season and propelling them into the title hunt.

“It’s definitely pretty cool and special to get it at [Land of Legends Raceway],” McLaughlin said. “It’s one of the best places we go. We’d been struggling… to go there and have a pretty good car all night and to go on and win the Feature is pretty cool. It’s our fourth total (victory) but to get the first points one is a wild statistic. Definitely means a lot and gets us that much closer to the points lead.” 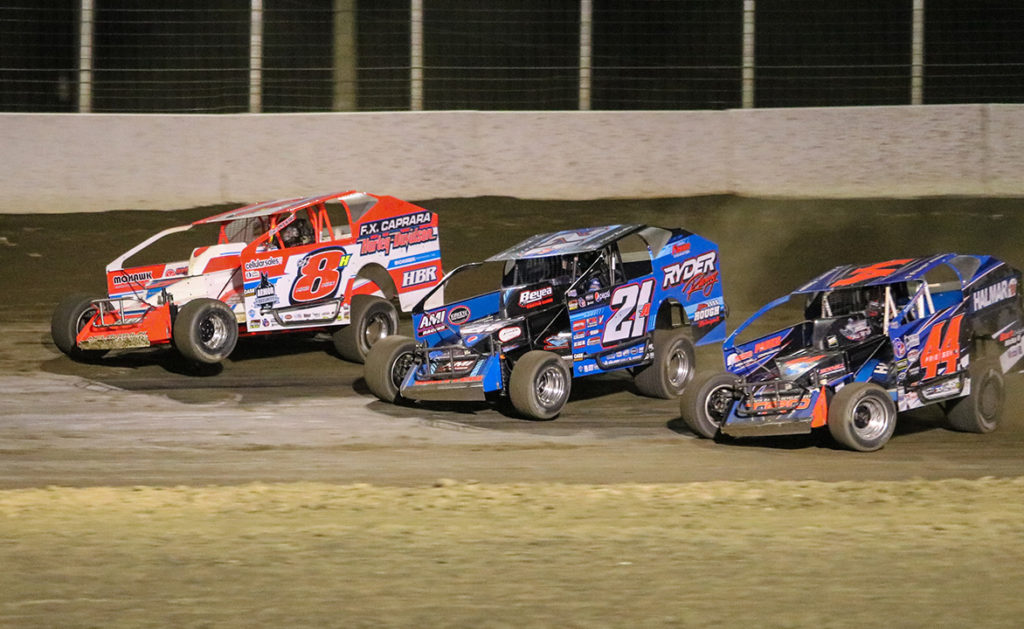 A DNF at Big Diamond Speedway dropped him to fourth in points, 55 points behind leader Matt Sheppard, but there are several upcoming tracks he has circled on his calendar, including the Hall of Fame 100 at Weedsport Speedway on Sunday, July 24.

McLaughlin earned his first career win at the 3/8-mile track – owned by his team co-owner Al Heinke. He also finished second during the Hall of Fame 100 last year. But his returned to the track in May was one of his worst performances there, he said, after a sixth-place run.

“We didn’t qualify well last time,” he said. “We haven’t really ran well there. I finished second last year and obviously won the year before. I was decent there last year. This year was probably the worst I’ve been in a while. Lacked rear drive. Something we’ve been struggling with all year. As of the last two weeks we’ve made it a little better. Just have to keep working on it.”

If he’s able to return to Victory Lane on Sunday, he’ll be rewarded with a $10,000 payday and a guaranteed starting spot in this year’s Billy Whittaker Cars 200 during NAPA Super DIRT Week on Sunday, Oct. 9.

In general, McLaughlin said he thinks his team has found a package he can be competitive with race to race, without having to make many adjustments, putting themselves in contention for the championship come World Finals at The Dirt Track at Charlotte in November.

“I think we definitely can (contend for the championship),” McLaughlin said. “Most people realize we haven’t been consistent all year, but we’ve been right there. Now, we just need to find that little bit more to deal with [Stewart Friesen] and [Matt Sheppard] everywhere we go.

Combine that confidence with the previous success he and Heinke-Baldwin Racing have had at Charlotte and Oswego Speedway – winning a Triple 30s Feature in 2017 – and the 22-year-old has the potential for a career year.

If you can’t make it to the tracks, you can watch every Super DIRTcar Series race, including the entire week of NAPA Super DIRT Week, live on DIRTVision – either online or by downloading the DIRTVision App.