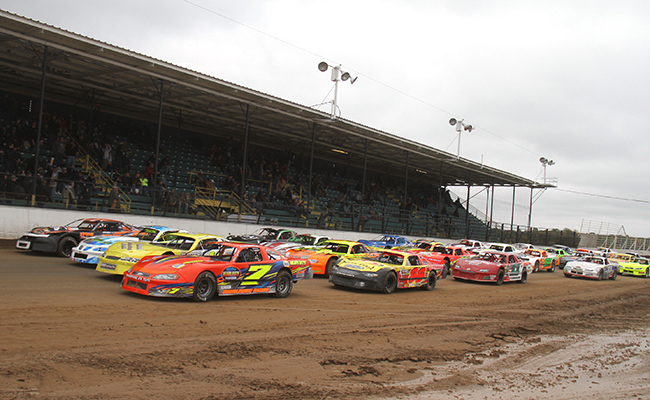 OSWEGO, NY – Oct. 4, 2019 — One year after one of the most exciting finishes in recent history, the DIRTcar Pro Stocks are set to take to Oswego Speedway again this year as part of the 48th annual NAPA Auto Parts Super DIRT Week.

The Wilkins RV Pro Stock 50 will get the green on Sunday, Oct. 13, and will feature 30 of the best full-fendered warriors in the Northeast taking on the 5/8-mile clay-covered oval for 50 laps and a chance at $2,000. A great season of local and Series action has brought the superstars of the division to the forefront, and now they’ll all come together on the big stage to battle it out for the ultimate bragging rights as a victor at NAPA Super DIRT Week.

There’s a long list of contenders that have a strong bid to win this year’s Wilkins RV 50, both south and north of the border:

C.D. Beauchamp – Last year’s Wilkins RV Pro Stock 50 winner made it an unforgettable finish, coming to the line side-by-side with Chuck Dumblewski after a bit of bump-n-run action out of turn four that ended with the Beauchamp’s #88 in Victory Lane for his first career Oswego Speedway triumph. He finished off the season just 39 points behind season champion Jocelyn Roy in the overall DIRTcar standings, and has returned with vengeance in 2019. He currently leads the DIRTcar Pro Stock Series points standings with three top-fives finishes in five starts, and eight wins in local action across four different tracks.

Rob Yetman – The five-time NAPA Super DIRT Week Pro Stock winner had just as much success on the Syracuse Mile as he has at “The Clay Palace,” taking the checkered flag in five of the last six years. Yetman had a great chance to make it six-in-a-row in last year’s running of the Wilkins RV Pro Stock 50, but a costly mistake on a lap 14 restart gave a him a major setback that he was unable to completely recover from. Running second, the rear-end of his #7 swung around in turn one on the restart, taking out a few cars behind him and his hopes to repeat as a NAPA Super DIRT Week champion. But Yetman will back with vengeance this year, riding on the momentum of three local Feature wins at Lebanon Valley Speedway, Albany-Saratoga Speedway and Utica-Rome Speedway.

Josh Coonradt – The 2019 Albany-Saratoga track champion has had a stellar season behind the wheel of his #00, capturing seven victories in local action across three different tracks. He currently leads the DIRTcar Hoosier Racing Tire Weekly Championship points standings by 36 points and will be riding that momentum into NAPA Super DIRT Week, looking for his first-ever podium finish in the Wilkins RV Pro Stock 50. Coonradt had a chance at his first top-three at Oswego last year, but got caught up in the incident with Yetman, sending him pit-side for damage that forced him into retirement on lap 40.

Jocelyn Roy – The defending DIRTcar Northeast Pro Stock champion comes into NAPA Super DIRT Week with just a single podium finish back in 2017. But it’s his two victories at Plattsburgh Airborne Speedway and runner-up in track points that makes him a good contender for his first Wilkins RV Pro Stock 50 win after a strong sixth-place finish in last year’s race.

Jason Casey – Another contender in the field without a podium finish at NAPA Super DIRT Week, Casey has driven his #324 to four wins and a runner-up finish in track points at Lebanon Valley Speedway this year. His efforts throughout 2019 have placed him sixth in both the Pro Stock Series standings and the Hoosier Racing Tire Weekly Championship. Casey’s drive from 20th to 10th in last year’s running of the Wilkins RV Pro Stock 50 shows that he’s capable of making passes while still remaining patient – a vital attribute of a winner at Oswego Speedway.

Nick Stone – Four wins in 2019 at Utica-Rome and Albany-Saratoga have brought good fortune to Stone this year, crowning him Utica-Rome track champion and placing him fourth in Hoosier Racing Tire Weekly Championship points. Two podium finishes at Syracuse in 2014 and Oswego in 2016 has the #27 driver hungry for a big win.

Jason Corbin – Albany-Saratoga has been very good to Corbin this year. Two wins in local action earned him a fifth-place finish in track points, and three-top fives in five Series races so far place him third in overall championship points. His best finish at NAPA Super DIRT Week came back in 2010; a third-place for the #8C. An 11th-place run in last year’s race after a 27th-place start shows his ability to get around at Oswego, look for that same determination this time around.