50 YEARS STRONG: Donald Stoltz will continue his tradition of attending every Super DIRT Week this year, having every ticket to prove it

In the grandstands during Super DIRT Week, a conversation sparked between two fans about Donald Stoltz – the tale of a man who has attended every Super DIRT Week and has every ticket to prove it.

“I think that’s just a bullshit story,” one of the fans said.

Then, the man sitting in front of him turned.

“I turned around and opened my book (of every Super DIRT Week ticket since 1972),” Stoltz said. “Then he said, ‘Oh, I guess you are a regular.’”

After attending the first Super DIRT Week at the New York State Fairgrounds in 1972, Stoltz knew he never wanted to miss another.

Stoltz, now 79, will accomplish that goal this year by attending the 50th Running of NAPA Auto Parts Super DIRT Week at Oswego Speedway (Oct. 3-9), adding another ticket to his Super DIRT Week tickets from every year he’s attended.

His love of racing goes back more than 60 years when his uncle brought him to a USAC Sprint Car at Reading Fairgrounds as a teenager. It was his first dirt race and the birth of a new passion. 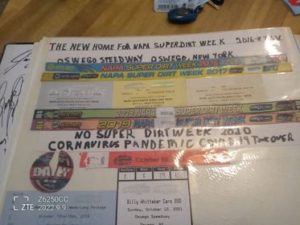 Dirt Modifieds were never in the picture early on, though. It wasn’t until friends asked if he wanted to go with them to a race called the “Schaefer 100” at the famed Syracuse Mile. He’d never seen a dirt Modified but knew the legend of the speedway and wasn’t going to pass up the opportunity to visit it.

“Hearing when the cars start up, I just love seeing them cars,” Stoltz said. “Enjoyed watching the cars [go through tech] and walking around and talking with the fans. Just the atmosphere.

He hasn’t let anything stop him from going. While he usually goes with a group of friends, if no one wanted to go, he’ll go alone. There were times when races closer to him would run against Super DIRT Week, but, still, he’d rather make the trip north. Last year, he had to attend a wedding during the event, but the second it ended he drove himself to Oswego.

Stoltz got the rare privilege of watching Super DIRT Week transform through the years. He saw the wooden grandstands get replaced with the large metal ones. He saw teams go from working off open trailers in the infield to having massive NASCAR-style haulers. He saw the cars evolve from coupes to the uniquely styled aero-dynamic machines they are today. And he saw legendary names pave the way for new ones to follow.

While it’s a lifetime of memories, each as memorable as the last, the couple that stand out the most, he said, were watching fellow Pennsylvanian Dick Tobias win in 1975 and seeing Gary Balough wheel the famous #112 “Batmobile” around the mile – two seconds faster than the field.

“The way that car drove around there, like nobody else was on the track,” Stoltz said. “Nobody could stay with him.”

Many of those memories were taken away when the Mile was removed from the Fairgrounds in 2015. But when Super DIRT Week found a new home at Oswego Speedway in 2016, Stoltz didn’t hesitate to keep his tradition going.

“I just enjoyed they kept it going,” he said. “When they moved it to Oswego, I said ‘I’m going to support them.’”

Now, with the event at Oswego Speedway, he said, to him, the racing has gotten better, and the atmosphere has expanded with easier access drivers. It’s grown beyond what he could have imagined in 1972.

Sitting in his same front stretch seat as years past, attending with his daughter his year, Stoltz will enjoy his 50th consecutive Super DIRT Week this October. And if you want to question that, he’ll have his book of tickets, in hand, to prove it.

To join him and start your own tradition, you can purchase 50th NAPA Super DIRT Week tickets by clicking HERE.