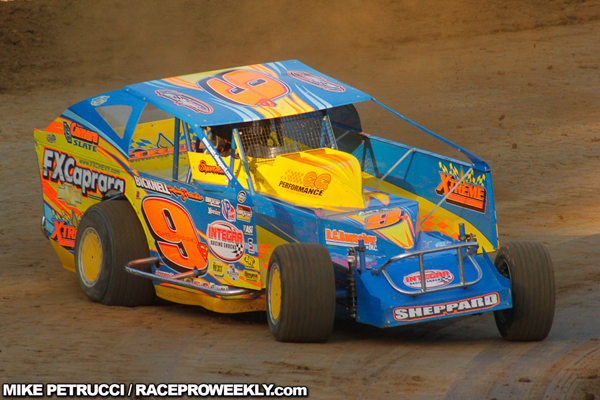 Matt Sheppard Banking on Hard Work and Preparation Paying Off to the Tune of $50,000 at NAPA Auto Parts Super DIRT Week XLII

“Syracuse is its own deal, but when you’re going to other racetracks and winning races and overcoming starting spots and other adversity it definitely gets you as a driver on a high note and the team on a high note, too,” said Sheppard, 31, of Waterloo, N.Y. “When you’re winning races, everybody wants to work a little bit harder, everybody wants to go the extra mile. It definitely doesn’t hurt to go into Syracuse with a lot of momentum and we’ve had a lot of that lately.”

Sheppard is the Super DIRTcar Series’ most recent winner in the JB Motorsports #9s heading into a week that begins on Tuesday at Rolling Wheels Raceway with the completion of the Stars & Stripes 100 that was rain-delayed during Labor Day Weekend. That event has certainly forced teams to be laser-focused on the task at hand during the biggest week of the year in DIRTcar action.

“It’s going to be a busy week with the held-over race from the Stars & Stripes, and we’re planning to go to Weedsport on Wednesday night for that DIRTcar 358-Modified race, and of course everything at Syracuse,” Sheppard said. “It’s just a lot of preparation. Just to be able to get to that week and have everything ready to go is a lot of work.”

Sheppard, who finished second to Brett Hearn in last year’s Syracuse 200 during NAPA Super DIRT Week, knows there’s no secret formula to winning at Syracuse, but being ready for anything the Moody Mile might throw at you gives you a chance to contend.

“We all saw something last year that we’ve never really seen at Syracuse and that’s the Sunday track conditions,” Sheppard said of the multi-groove track surface that led to side-by-side racing. “It was completely different than anything I’ve seen at Syracuse. This year should be really interesting because you have a lot of teams guessing what the track conditions are going to be, whether it’s going to get super slippery and be really wide or take rubber and be faster. We really don’t know, and that’s a big factor in Sunday’s race. Plus, with DIRTcar allowing the (softer) right rear (tire compound) on Sunday, that’s going to affect the race. Different pit strategy, different caution windows, there’s a lot of variables going into this year’s race and it should be interesting because everybody is on the same blank slate right now. Nobody knows what the best pit strategy is going to be or the best tire choice or what the track conditions are going to be.”

Being able to adapt clearly is going to be the key to taking home the $50,000 winner’s check in the Syracuse 200. It’s what Sheppard and his team have prepared for since driving out of the infield last year as the runner-up.

“It’s a lot of work for everybody,” Sheppard said. “We’re not the only team that’s busting our butts getting ready for Super DIRT Week. There’s probably 40 to 50 other teams getting ready the same way we are. There are so many variables going into the whole week. Qualifying, track position, track conditions, whether or not your car is handling as good as you’d like, pit strategy, luck. There’s just so many things in the equation that have to go your way to be able to win that race. Everybody is preparing their best, doing everything they think they need to do to go there and win that race, and only one person does every year.”

For Matt Sheppard, a repeat of 2009 would be just fine.