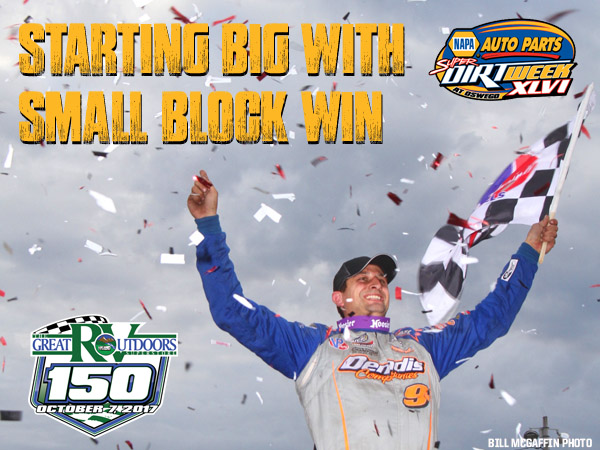 “He was doing whatever he could do to try to win the race,” Sheppard said chuckling from Victory Lane. “I joked with him. I told him, ‘you owe me a back bumper tomorrow.’ It was fun racing with him.”

Sheppard momentarily surrendered the lead to Williamson upon hitting lap traffic in lap 60 and sliding up the track while Williamson passed him on the inside, but he gained back the lead in similar fashion just four laps later.

“I think I gave the race away and gained it all back right in four laps,” said Sheppard. “I got underneath the lap car getting into three and just caught a bad angle and slid up off the bottom. Matty [Williamson] rolled by me, and I thought that was the race right there. But I dug deep, and luckily the 9 had just enough in it and we were able to turn up the wick a little bit and get underneath Matt down the backstretch. You can bet I didn’t get off the bottom the rest of the race.”

And he didn’t. Williamson pulled all the punches through the last 50 laps, trying to work his way around Sheppard, but the Waterloo, NY native just kept closing him out, holding him off through the checkers.

Pole sitter and 2016 NAPA Super DIRT Week 358 Modified Champion Tim Fuller led the first 27 laps before surrendering to Sheppard — a familiar battle for the two in the Big-Block Modified division.

Behind them Peter Britten, Pat Ward, Erick Rudolph and Stewart Friesen pretty much maintained their order throughout the 150-lapper, with Billy Dunn passing the bunch to complete the podium, and six-time NAPA Super DIRT Week 358 Modified Champion Brett Hearn slowly working his way to fourth from his starting 10 spot.

“I think if I wanted to I could have run up there and raced with them,” said Dunn. “ But nobody really knows what a tire’s going to do for 150 laps here, so I just did what I could early to get some spots and once I got to third I was happy to ride there.”

Mike Maresca took home the Scott Jeffrey’s Performance Plus Hard Charger Award, along with $500, finishing in 20th from his 30th starting spot.